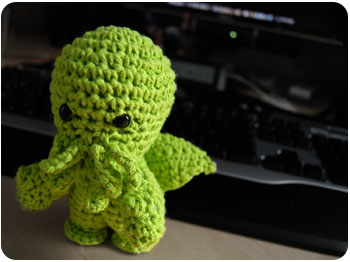 This has been a running joke in our house for a while now, in fact ever since the Lamantooie Massacre in fact, that my wee son Dylan is the Cthulhu of the Legoverse. So when my wife saw this pattern she had to make one… erm… actually, 3? Well it was supposed to be for Dylan, but since I liked it so much I got the first one. w00t! w00t!

So now we still have to get one for the namesake, and now me bro wants one too. I can totally see why, since they are super awesome and as cute as the Great Cthulhu  would allow himself to be. The runner up for cute Great Cthulhus would be the John Kovalics My Little Cthulhu. Take him and his cute little victims, and it's just too hard to see him as the great destroyer of legend – but it's not too hard to envision him as desk flair.

So next time you're in my office, take great heed and beware the wrath of Cthulhu!

3 thoughts on “The Great Cthulhu lives!”