I bet it can. Take, for instance, the group of completely idiotic commercials featuring Bob Roll for Trek bikes. This guy is a scar on the face of cycling, and should be removed with laser surgery the first chance there is. If you have ever wondered why people see Americans coming from 10 miles while overseas, this is exactly it – to the point.

I have purchased and been a staunch advocate for Trek bikes for going on 12 years now. I love their bikes, Top notch quality and craftsmanship. I have never had any problems or complaints with any of the bikes I had, even when bombing down a single track at night with Eddie and Chris, and nailing a ditch doing 30 and slammin my helmeted grape into terra-firma all the while gassing oil from my Manitou EFC faster than the expletives could stream from my lips. But his guy…. man, I can’t stand this twit! 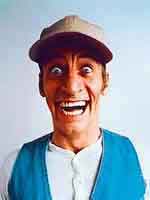 His crappy reporting, and lame jokes defile the commentary of Phil during the Tour, luckily they have the good sense to not put them side by side very often. He makes it completely unwatchable. I’m digressing though.

I haven’t seen commercials this bad since Jim Varney was doing the Hey Verne crap a decade ago. The main difference here though is Varney was a comedian, and he could be funny – even though the commercials were awful.

I don’t really care what his accomplishments are. So what. You don’t see Greg LeMond or Bernard Hinault dancing around like they have to take a leak on TV do you? No. You know why? They aren’t stupid. It’s not funny, and they know it. Oh but wait… maybe that’s the difference between a race leader and a mediocre domestique?

Roll is one of the main reasons why I decided not to get OLN again this year and watch the Tour coverage, he makes it unbearable. And the fact that OLN keep him on the payroll simply makes me want to keep my money and follow the races online.

But hey, Floyd’s back in yellow – so it’s all good. Allez, allez!