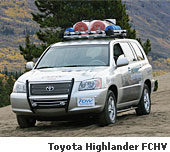 In a recent press release, Toyota has completed a 2,300 mile Journey from Alaska to Vancouver in their Fuel Cell powered Highlander FCHV. This pretty exciting news, and to-date, is the longest published trip (that I could find) of any of the big auto manufacturers. It boosts mileage exceeding 300 on a single tank of Hydrogen. Since the current/estimated cost varies from $1 to $20 a kilo (a gallon of gasoline has the same energy content as a kilo of hydrogen), it’s still not really ready for these vehicles to hit the consumer market. Granted, on a 1 to 1 ratio, the Fuel Cell vehicles get 2 to 3 times higher mileage, it still could cost you $100 bucks to fill your tank to go 300 miles, or maybe only 5 bucks.

The other big guys in America are jumping on the band wagon too, and GM seems to have the jump on everyone else, plus they have themselves are really nifty set of icons to go along with their program. Although Ford is developing a Transportation system based on Fuel Cell buses, primarily shuttle buses right now, but this would be a huge step in the right direction.

Fuel cells also seem to be the greenest way to go, even though the question of a hydrogen explosion still keeps coming, since other fuels like BioFuels are so hotly debated as to how green they really are. For example, last year the US consumed some 140 billion gallons of gas, it would roughly take 12 million acres of corn to meet this need. That’s a lot of corn. 1,870 square miles to be precise. which is roughly the size of Delaware; I wonder if they would mind? Governments are already legislating against the clear cutting of Palm trees in countries like Indonesia that are displacing communities all due to the need for BioFuels made from Palm oil. The lack of a standards system is also an issue right now, something which we take for granted with gasoline right now.

With all of the worlds Fossil Fuels and nonrenewable resources being depleted at an alarming rate, we need to find a renewable resource to fuel our cars, and power stations. With the fuel of Fuel Cells being hydrogen (the simplest element and most plentiful gas in the Universe), this is the best we have to date. Running out of hydrogen doesn’t seem like it would be an issue, and besides it could be solution to the Polar Ice caps melting; they melt – we use the hydrogen in the water to run our cars and trucks. See? It’s a win win.