Last night Jeremy, Amanda and I went to the Zippo Hot Tour show in Pittsburgh (actually Millvale – but Pittsburgh is a bit more accurate), and I have to say it was awesome. Being the trio of coolness that we are, we got the VIP treatment, including some swank badges. The line up is Papa Roach, (hed) p.e., and Stealing December. All of these bands are awesome and they tore this place down!

See what you’re not getting here is Mr. Small’s is a converted Church – so it is indeed Small. Tiny actually. There is no backstage. There are dressing rooms and the like up stairs, but it was all they could do to get all of their gear and lighting crammed onto this tiny stage that would about 1/3 the normal size of even a small venue. The place could probably hold no more than 1,000 screaming freaks, and that’s hemorrhaging people. So we meet with the tour manager, Jodi, and she takes us back early, shows us around, and swag’s us up. Nice! Everyone likes free $h1t! So we kick it for a while, and just hang while we wait for Jacoby to show. In the mean time Brandon, Stealing December’s Lead singer, rolls out and we chat it up a bit. I also got to hang with Michaelangelo a bit at the swag counter. These guys are great, this couldn’t have happened to a better bunch of guys – I mean come on! Who gets this chance so young in life and career? So after a bit more hanging out look like a bunch of old guys at a concert, we meet Papa Roach along with some other folks for the meet and greet. These are cool, I mean, I’m not sure what I was expecting – but it wasn’t at all what I was ready for. After the meet and greet we went upstairs and hung out a bit. These guys are really down-to-earth normal dudes – and great musicians. I don’t care what anyone says – these guys freakin’ rock! Oh yeah, and you! That crazy b!otch impersonating Jacoby’s wife on myspace – get a life of your own you psychopathic trogladite.

The show was awesome, and I’m not sure how anyone could have asked for a better show. Stealing December tore it up and kicked the night into gear with a great selection of tunes, and I can’t wait to see what else these guys come up with in the future – this is a good band. They had a great stage presence and put on an excellent show – much better than a lot of some of the so called big-name bands I have seen in the past.

So (hed) p.e. takes the stage next, and I had not heard these guys before last night, and they are impressive. They go from punk, to regee, to I don’t know what. It’s like having 3 bands rolled up into one. The all tore it up, and Jahred has an amazing range – this was a totally unexpected result for what I thought they were going to be like. I got to meet Jahred briefly after their set, and he too, is just a great guy. They started their set with a rendition of Everybody Look What’s Going Down  [Originally by Buffalo Springfield) – and it was awesome. In retrospect I should have sprung for a mic for my iPod and recorded the damned show! 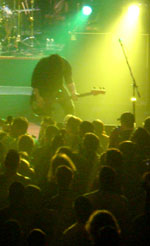 So Papa Roach finally takes the stage, and they pretty much rock from start to end. No breaks, no pauses – pure adrenaline! It’s amazing that these guys do this damn near every night for months at a time and still hold energy and enthusiasm for what they do. The show was awesome. They played new songs, old songs – you name it. A lot of stuff I hadn’t heard before too – but that wouldn’t be too hard.

They had a cool set up, and it was kinda funny – Dave looked like he was towering over the drum set in the back, we was back there knockin’ it out, dominating the drums – while the other guys killed the crowd up front.

The whole night was crazy! Getting to hang out with guys from the bands, the music, the whole package was awesome! This will go down as the best concert I have been to; ever, and the most fun I have had in a really long time! Okay, so maybe the driving home afterwards and finally getting to lay my head down at 4:30 this morning was more like a barrel of screaming monkies – but everything up until then was a riot.

Watchin’ the psychos in the mosh pit fling each other around, hanging with Jeremy while he’s doing shots with Dave from Papa Roach. Hanging with a bunch of the crew and Jacoby’s wife, while they argue about whether poker is all luck or skill. Ha! It was awesome! Everyone we met last night was awesome, I can’t believe how cool everyone was – I mean I know we were from the tour Sponsor and all – but come on! Everything was above and beyond what I expected, and they were all like – meh, whatever, it’s cool.

Thanks to everyone who facilitated this evening, Jodi you rock! If you haven’t checked the bands, do it now! Either on MySpace, or their actual websites, especially Stealing December – those guys are awesome and I wish the best of luck!