I have been trying to drag my carcass out of the house more often to go for walks, since it’s about the only thing I can do these days, yeah… Kenpo is still out since my transplant. Any ways, I tend to drag the boys with me since they run, and Dylan tends to be SuperFast!

We (the boys and I) were out at the Marilla Reservoir outside of town, and I started seeing Fungus with scrawling on them. The first one was near the main bridge crossing the overflow to the earthen mound we like to call a Dam – and someone had carved Serenity into the surface of it. Weird. I mean, who really ever thinks of carving up a freakin’ toad stool – never mind with something as ambiguous as Serenity. Maybe it’s a girl’s name, either that or Malcolm dropped by for a visit while he was hiding out from the Reapers that live in the Asteroid belt. 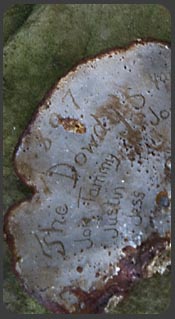 I didn’t really think anything of it until about half way around, I saw another. This time it was a large specimen and had more space to write, and following suite with having more canvas – more was on it. The whole Dowdy clan gouged their names into this hapless forest object – all 8 of them, they even saw fit to slap a date on it for posterity. This one I actually didn’t see until the last time I was out, when the whole fam-damnly went for a walk in the woods. Okay, Litsa and I walked, the crazy-makers ran and occasionally fell, one time right on top of one another; which as it happens was funny for us: not for them. 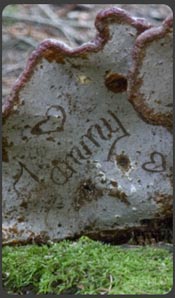 The third one seems like a continuation of the second, some of the same names are on this as there were on the last  – so I can only assume that they didn’t have enough surface area to get their entire message out into the wilderness so they had to inflict their time-capsule-esque desires unto another fungus. This is really quite amusing. I for one have never been big into scribing my name into anything – having never done it, nor have I ever had any desire to leaves me at a loss as to why people do. At least it’s on this instead of black spray paint on the bridge or rock benches.

I’m going to have to keep an eye for more of this sort of thing as I wander around the area. These 3 may in fact be perpetrated by the same group of fungus-writers, but it’s likely that other people will see it, think it’s funny or clever – and then continue the trend elsewhere.

3 thoughts on “Graffiti anything – living, inanimate or even fungus….”